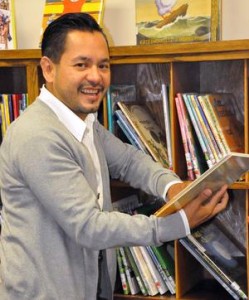 Originally from Guadalajara, Mexico, Ernesto teaches English to junior high students there. He came to Sleepy Eye as part of an international exchange of teachers program between Mexico and the United States. The Binational Migrant Education program has been going on for several years throughout other western and southern states in the U.S. This is Minnesota’s inaugural year.

Three licensed Mexican teachers are in Minnesota working alongside migrant school teachers throughout the state for six weeks to gain an idea of the cultural experiences and education migrant students receive.

This is in an effort to gain a better understanding of the resources that may be available to help both Mexico and the United States partner together to give students the best educational opportunities that are available.

Ernesto said his primary goal while he is here, is to make sure the migrant students understand their Mexican heritage and culture.

“Many times the parents are working so hard that they don’t have time to teach them about their heritage,” Ernesto said. “A lot of times children will know they are Mexican, but not much else.”

Ernesto says that sometimes students have the ability to speak Spanish, but prefer not to, so that they can fit in with the American culture.

Ernesto’s role of teaching Mexican culture while he is here is very important because this generation of migrant Americans with Mexican heritage have begun to loose their culture and language.

“The migrant people are very good people. I encourage the community to take an interest in the migrant population and the educational opportunities that are here,” he added.

He went on to say that America is very much a multicultural country, with people from around the world choosing to live here.

“All people are at an advantage by knowing multiple languages. I want to teach the kids that they have more opportunities open to them by not only learning about their culture, but knowing different cultures from around the world,” Ernesto declared.
He says this happens not only here in the U.S. but also in Mexico. United States born students with mixed heritage parents are returning to Mexico and the students are lacking the ability to speak Spanish.

He sees the American students who migrate to Mexico with their parents having the same challenges learning in a Spanish speaking school that the migrant students here have.

The school system in Mexico includes six years of primary school, three years of secondary school and three years of preparatory school. When students from America migrate to Mexico, it can also be difficult to place them in the correct grade.

Ernesto said that as a solution, the Mexican school systems are hoping to implement paperwork that will explain what grade the students were in while in America, what subjects they have studied and what grades they received so they can better help place those students in the correct learning environment.

“This program is good because it will give Mexico the opportunity to see how and where students are coming from,” Ernesto said.

One thing Ernesto said impressed him about the Sleepy Eye school that he wants to implement in his own school once he returns is the Sleepy Eye Pride initiative. Signs hanging in the school ask students to respect everyone, respond safely every time and be responsible every where.

He said he likes that the students have the visual signs around the school and those values reinforced by teachers. This, he said, allows the students to learn how to be better people.

One luxury that schools across the nation have that Mexico does not is access to technology—not only in the school, but also in the classrooms. Ernesto explained that some schools in Mexico have access to technology, but not all of them. His school is one that does not afford that luxury.

Ernesto commented that not only is he teaching students about their Mexican culture, but he’s growing and learning alongside them.

The SEHS Migrant School serves 110 students from Sleepy Eye, St. James, Springfield, Fairfax, New Ulm and Butterfield. Students begin arriving from mainly Texas and Mexico in April and May and stay until the migrant season ends in October.