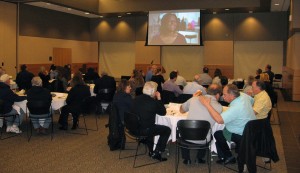 Tri-Valley Opportunity Council, Inc., along with The City of Crookston, The Chamber & Visitors Bureau and the Crookston Early Childhood Initiative presented a viewing of the “Raising of America” (The Signature Hour) Documentary on Wednesday, March 30 at the University of Minnesota Crookston’s Bede Ballroom.

The informational event drew 45 leaders from the area business, government, and early childhood communities. Those in attendance watched the documentary, learned about the U.S. statistics as it relates to poverty, early childhood development, cost and availability of childcare, etc. Following the documentary there was an open discussion based around questions from the video in regards to: We all want what’s best for our children, so why is child well-being in the U.S. so much worse than other rich nations? Why do we allow our most vulnerable children to fall so much further behind the median? How does the squeeze on young families and caregivers—the squeeze for time, money and resources—drip down on infants and young children and alter the wiring of their developing brains with potential long-term consequences?

The Raising of America Series is a five-part documentary series that explores the question: Why are so many children in America faring so poorly? What are the consequences for the nation’s future? How might we, as a nation, do better? The film joins Dr. Renee Boynton-Jarrett, a trusted pediatrician and researcher at Boston Medical Center, Dr. Jack Shonkoff, director of the Harvard Center on the Developing Child, Nobel Prize-winning economist James Heckman and former multi-billion dollar hedge fund manager Robert Dugger. Each brings a very different perspective to the importance the early childhood experience and yet each tells us the same thing: for children to do better in school and in life, we can’t wait until they enter kindergarten. Crucial brain development occurs during the very first years of life. (From www.raisingofamerica.org)