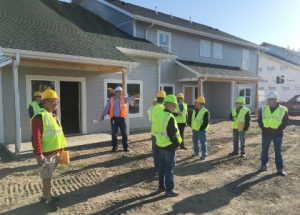 The Crookston Housing and Economic Development Authority (CHEDA) brought the board, city council, Crookston Chamber of Commerce, and other interested parties on a tour of housing options in Crookston after their meeting on Tuesday morning.

One of the stops was at the Agassiz Townhomes on the north end of Crookston.  The tour was led by Jason Carlson, Tri-Valley Opportunity Council CEO, who showed off a two room and a three-room townhome.  Carlson said the townhomes are well built. “We are really proud of it.  We feel this will be a wonderful addition to the community, utilizing that brownfield site first and foremost is going to be a big deal and the quality of units we are bringing online is going to be a benefit to the community,” said Carlson. “We are held to some very high standards with the framing, insulating, and air sealing which demonstrate how well built these buildings will be when they are complete.” 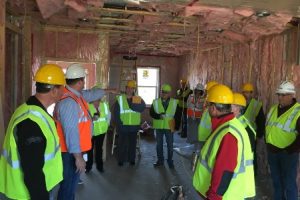 The estimated rent for the two bed room townhomes is $680 per month with an estimated utilities cost of $110 per month.   The three-bed room rent will be $745 with estimated utilities at $131 per month.  “This absolutely was targeted to the lower income workforce, that is why there are so many three bedroom and two-bedroom units.  There isn’t a single bedroom or studio units,” said Carlson. “We are hoping families that work in town will choose this new development and have children for the school district and make their home in Crookston.”

They are hoping to start leasing units on the north-end of the property sometime in August or September and the rest of the units in October.  The project was made possible by the work of many entities working together. “It has been a wonderful partnership between the city and CHEDA and a lot of local employers that contributed and Tri-Valley and I am going to preach about that until the folks are tired of hearing from me,” said Carlson. “It is a community project and I was very happy to show off some tangible progress.  We all have different resources we can bring to the table and work to combine those resources, we can do a lot more together than we can individually.”  (Photos courtesy of KROX Radio)